Whether you’re a beginner coach looking to start your coaching journey, or an experienced coach looking for more specialised training, formal coach education courses are one of the best ways to improve your knowledge of the game. They’re almost always tremendous fun as well, and will bring you in to contact with friendly coaches from across the game. 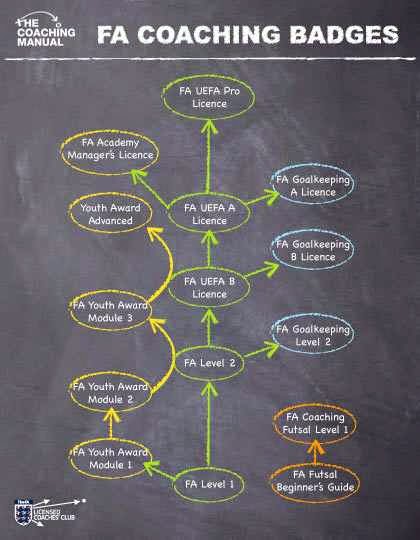 In England The Football Association are responsible for the vast majority of coaching badges and coaching courses.
The FA Level 1 and FA Level 2, along with the age-appropriate Youth Award Modules (Part One and Part Two of the Youth Award) are administered by County FAs, local colleges or private companies.The UEFA ‘B’ Licence, UEFA ‘A’ Licence and later stages of the FA Youth Award are serviced exclusively by The FA’s National Coach Education staff and can be booked directly through TheFA.com. How these qualifications fit in to the overall coaching pathway is illustrated below.


In this article we explain what each course is, how much it costs to take (in both time and money) and what you need to do to take it. We’ve also separated the qualifications in to our recommendations for coaches of predominantly children and predominantly adults, and we’ve included a few of the extra courses which are made available by independent organisations and companies.

This course provides an introduction to the organisation and delivery of safe and enjoyable coaching sessions for players. It is ideally suited to those working with groups of young players as an assistant normally under the supervision of a Level 2 qualified coach.

This certificate offers an opportunity for aspiring football coaches to be supported in developing their knowledge of how to effectively coach a local club or school team by introducing practical drills to develop players’ technical skills such as shooting, turning with the ball and heading. The course also includes a Safeguarding Children workshop and FA Emergency Aid workshop.

A course designed for coaches at all levels who wish to expand their knowledge of coaching by developing appropriate learning environments. There are generic strands relating to teaching and learning, motivation and self-esteem suitable for most coaches.

The course provides practical sessions and advice for coaches, and will increase the candidate’s knowledge of how to develop their coaching to incorporate The FA four-corner model.

A course designed for coaches involved in youth football development, from grassroots to professional level. This course provides candidates with the chance to improve their knowledge and confidence in a range of key issues around developing and understanding practice.

This course introduces a number of generic strands applicable to all players, regardless of age, and these are consolidated in Module 3.

For coaches who have an ongoing involvement with sport, the FA Level 2 Certificate in Coaching Football provides candidates with an introduction to the processes and principles of coaching football to adults and children.

The Certificate offers an opportunity for potential football coaches to be supported in developing the knowledge of how to effectively plan, conduct and evaluate football coaching sessions. It will also introduce the candidates to an appreciation of the principles of the game, both attacking and defending, and how to utilise this knowledge for invasion games.

Module 3 is designed for coaches who currently work (or who have a realistic opportunity of working on a consistent basis) with a group of youth players within the performance or elite levels of the game. The course requires coaches to develop the ability to analyse performance within the principles of play (attacking or defending) and show an aptitude for the design of practices specific to the needs of individual players within their charge. Such practices may involve considerations of role-specific requirements within the match-play scenario.

The FA UEFA B Licence

For coaches who have an ongoing involvement in the coaching of a team playing 11v11 football, the UEFA B Licence is an in-depth exploration of every aspect of coaching, including; a philosophy of coaching, how players learn, coaching styles and communication processes, player analysis, psychological factors associated with player performance, the Four-Corner Model and player development, planning appropriate coaching sessions, session delivery, progressive coaching sessions, session evaluation and reflection, fitness programmes and planning.

The course also develops candidate’s technical understanding of the game and the practical elements of the course cover; principles of attacking(from wide/central areas, counter attacking, switching play and finishing), principles of defending (defending effectively in wide/central areas, pressurising and defending when both organised and outnumbered), midfield play (support play for front players, possession in key areas and the use of width), counter-attacking (defend deep and attack quickly), goalkeeping (support the defence, deal with crosses, maintain possession, shot stopping), set plays (effective organisation from a selection of free-kicks, corners and throw-ins).

The FA UEFA A Licence

The UEFA A Licence is the highest practical coaching award currently available and builds on technical and tactical content covered in the UEFA B Licence course or the other recognised equivalents. In addition the course focuses extensively on the effective application of the principles of play in the 11v11 game and the development of specialist individual roles within the team.

For coaches who are, or who intend to be, working in 11v11 football within the international, professional, semi-professional and elite girls or youth programmes. The UEFA A Licence develops varied coaching styles and methods throughout the course, and functional practices, phases of play, small-sided games and 11v11 structures are employed in the presentation of the practical content.

The content exceeds the minimum requirements specified under UEFA guidelines (120 guided learning hours), as it is designed specifically to meet the needs of coaches working in England.

This course is intended for holders of the FA Level 2 Certificate in Coaching Football who wish to coach goalkeepers at non-league or junior and youth level.

The FA Goalkeeping B Licence

The FA Goalkeeping A Licence

A course which demonstrates the Coerver Coaching approach to player development and teaches coaches some of the drills and games that Coerver Coaching founders Alf Galustian and Charlie Cooke have developed over the last 28 years.

A series of courses which teach grassroots coaches how to structure their development plan and deliver sessions that meet the needs of their players; by creating fun environments that help them to develop excellent individual skills and intelligent decisions within the team game.

Always contact your local County FA and ask if there is funding available for courses. You can also save hundreds of pounds by joining The FA Licenced Coaches Club and by booking online.

Tell us which courses you’ve taken – what benefited you and what would you have liked to have been different? Which course are you planning to take next (and why)? Are there any areas of coaching not covered in the traditional courses that should be?